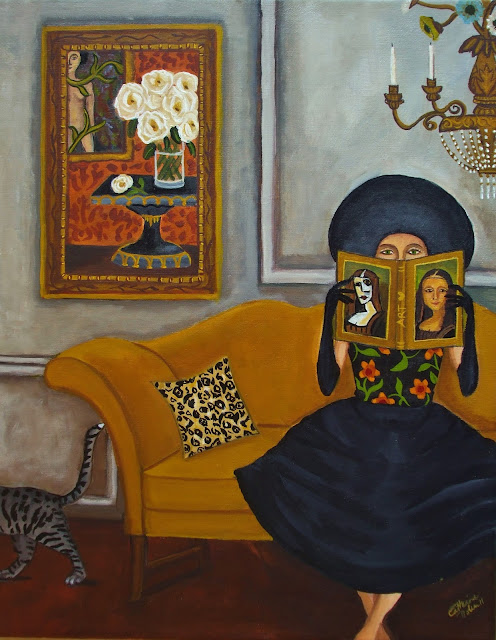 "The collector is an artist in his own way, by the way he puts things together. You can read a person's soul from their collection." SOLD
- Ayers Tarantino, Art and Antiques, Dec 2008
Posted by Catherine Nolin at 6:54 AM 1 comment:

Art and Quote of the day ~

Art and Quote of the day/SOLD 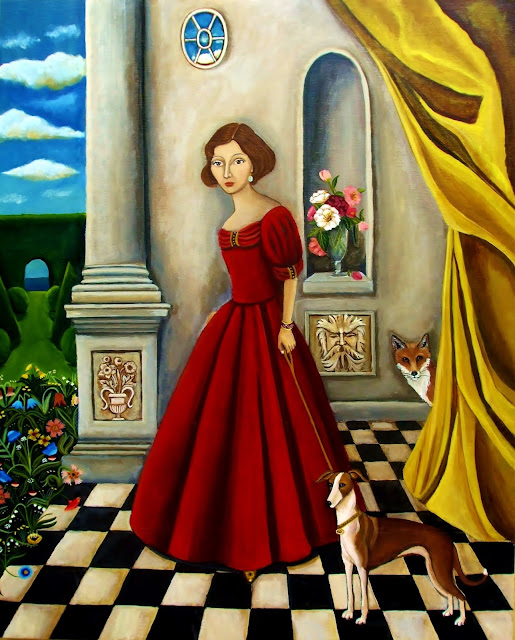 "One can speak poetry just by arranging colors well. "  Vincent Van Gogh
Posted by Catherine Nolin at 9:42 AM No comments: 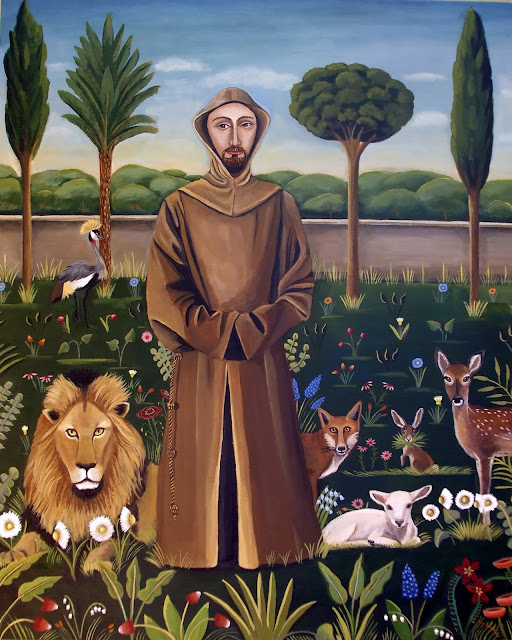 Completed on 9-25 painted on a birch wood panel with painted sides.  St. Francis has wide appeal with both the animal connection and of course his story.  We had a Giotto poster of him growing up  at the entrance to our basement that I loved and my mother became a member of the Franciscan order when I was a teenager.    Another connection would be that my son Sam's school is located at a former Franciscan seminary.   I've painted different versions over the past 5 years. http://catherinenolin.org/artwork/3851391-St-Francis-Of-Assisi.html
St. Francis was born at Assisi in 1182. After a care free youth, he turned his back on inherited wealth and committed himself to God. Like many early saints, he lived a very simple life of poverty, and in so doing, gained a reputation of being the friend of animals. He established the rule of St Francis, which exists today as the Order of St. Francis, or the Franciscans. He died in 1226, aged 44.
Posted by Catherine Nolin at 12:03 PM 2 comments: 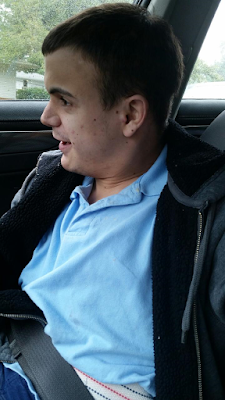 Not promoting any of my work, just wanted to express gratitude this morning for many things that are"going right."  As many of you know my son Samuel now 21 years old, who has both autism, ulcerative colitis, and a cerebellum disorder  is  transitioning to an adult residence after 7 difficult years in a residential school.   We have made some big changes in his diet and therapies and he is having a much better 2015 so far. The staff has been amazing and loving all along.  I really need to stop and reflect on the improvements because to the average person they may not seem like much, but to us, a smile, a hug, allowing staff to brush his teeth, using his communication book appropriately to request something instead of self injury is huge and makes my heart soar. We still have a long way to go but I am grateful to see the world in a different way and will never give up improving his life.

Posted by Catherine Nolin at 9:18 AM No comments: 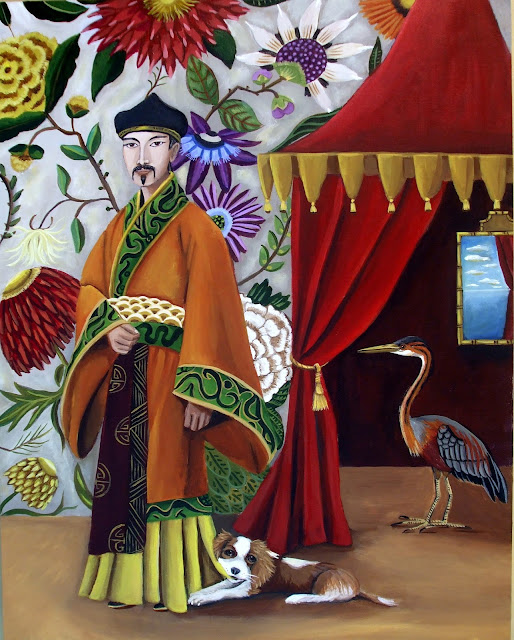 SOLD/Completed on 9-18.  I've been really into Chinoiserie style again.  I find the fabrics and wall coverings so intriguing. I can truly express my love of design and color when I create this type of painting. I originally was going to call this just The Emperor's New clothes but then my husband said since I had the King Caviler pup in there that I should call it The Emperor's New Dog but I decided King would be perfect and sort of confusing as the same time.! This piece is 11x14 painted on a cradled birchwood panel with painted sides.  Thanks for stopping by my work. View it on my website by click on the link.....
http://catherinenolin.org/artwork/3847737-The-Emperor-s-New-King.html
Posted by Catherine Nolin at 2:37 PM 1 comment:

Inside Out- New Painting 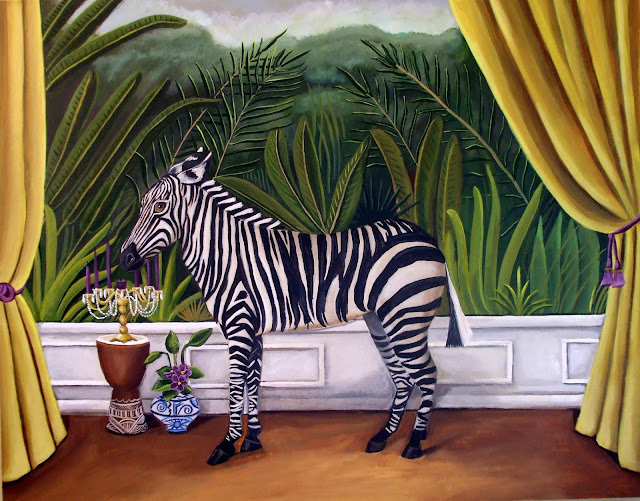 Completed on 9-12 painted on a cradled wood panel with painted sides. I have always loved the bold contrasts. Blending interiors, landscapes, objects and animals. Love G. Stubbs (:
http://catherinenolin.org/artwork/3844378-Inside-Out.html
Posted by Catherine Nolin at 3:12 PM No comments: 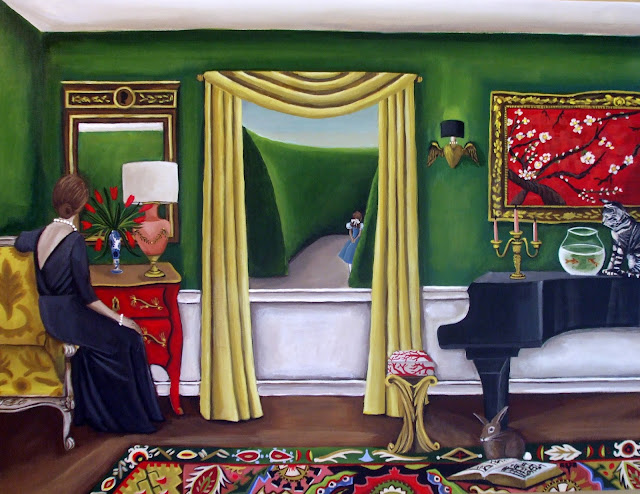 I completed this painting on 9-7.  I am so pleased the way this painting came together.  I started out with just an image of a woman looking out a window and then the rest fell into place each day.  It has already sold .  Thanks for looking.
www.catherinenolin.org
Posted by Catherine Nolin at 6:30 AM 1 comment:

Catherine Nolin
At a very young age I became fascinated with colors and with the emotional impact of various color combinations. I had the benefit of being the sixth of six daughters; in many respects they were my mentors. In our family, Italian traditions—family, food, religion—were fundamental. When I was 10 years old, a family friend, an artist, recognized my talent and enrolled me in a class at the Museum of Fine Arts in Boston. After that seminal experience, I continued to draw and in high school I practiced drawing furniture pieces and chairs with fabric patterns. The Italian Renaissance became my favorite art history period and I often incorporated objects and themes from this period into my work. In college, I studied pottery, figure drawing and art history. After marrying, I had three sons, the youngest of whom was diagnosed with autism. Painting for me became a necessary therapy. What started as a part-time escape became a full-time profession and I am grateful every day to be able to do what I love. My studio is in my home. I have sold paintings all over the world and have exhibited in galleries and shows throughout the Northeast.